Argentina is the second largest country in South America. We are best known for Eva Peron and our romantic Tango, which you find everywhere you go. Argentina is elegant, passionate and simply stunning. It is hard not to be swept of your feet, when you visit our beautiful country.
But of course, Argentina has so much more to offer, what to think of Calafate down south, with its stunning Perito Moreno gletsjer, the mile-long Iguazu Falls in the northeast, the wine areas of Mendoza to gauchos, (the cowboys). Argentina is a journey of unique experiences from the moment you land till the moment you leave..

This email address is being protected from spambots. You need JavaScript enabled to view it.

Buenos Aires
Buenos Aires is the most European of South American cities: Parisian boulevards and architecture, neat squares and parks, fine museums, fashionable shops and gourmet restaurants. Huge steaks are a local touch and the passionate tango nightlife particularly Argentine. Worth a visit are the bohemian quarter of San Telmo, the old colourful port area of La Boca (where tango was born), and the smart area of Recoleta, where the renowned Hotel Alvear Palace is situated and the tomb of Evita Peron. Nearby is the Costanera Sur Wildlife Park. Like London the docklands are being transformed into a modern café based attraction.

Cuyo
The name Cuyo is given to the vast arid plains covering the provinces of Mendoza and San Juan. The rivers fed by the perennial Andean snows have provided an oasis that has become of the world's largest wine producing areas.
The pleasant city of Mendoza is the perfect base for visiting the many surrounding vineyards or for reaching the ski centres of Los Penitentes and Las Leñas which combine good snow with first-rate facilities.
Aconcagua is the highest peak in the Americas. Found in the western province of Mendoza, and its summit rises up to 6,959m above sea level. It is the goal of mountain climbers from all over the world. Reaching its summit is challenging but technically straightforward, requiring good training and careful planning. It is located within the Aconcagua Provincial Park and non-mountaineers can find other adventurous activities.

Iguassu Falls
Sometimes described as being one of the 7 natural Wonders of the World; in fact, Iguassu Falls are neither the widest waterfall in the world, nor are they the tallest. However, what it lacks in width and height it makes up for elsewhere. On the Parana River, the falls act as a natural border to the countries of Brazil, Argentina and Paraguay and compose of 275 cataracts in total. Best time of year to see the Falls is between October and December and as this is such a magnificent sight, it is highly recommended that you make arrangements to stay at least one night here.

Lake District
Argentina's region of mountains and lakes is South America's version of Switzerland. The dramatic lake Nahuel Huapi is the biggest and most famous National Park in the country. The luxurious hotel Llao Llao is located here. The main town is Bariloche, which even has chalet-style chocolate shops and fondue restaurants. The trekking is good and one can escape the crowds far easier than Europe. Dinosaurs left their footprints at Neuquén. San Martin de Los Andes makes a good base for hiking, biking or water sports on Lake Lacar. Intrepid travellers can follow the Butch and Sundance trail to Cholila.

Los Glacieres National Park
Definitely not to be missed is the Los Glacieres National Park. At the western end of Lago Argentino is the famous Perito Moreno glacier, one of the few ice masses thought to be advancing. Occasionally the spectacular glacier cuts off the Brazo Rico river until the water pressure is sufficient to rupture through. This happened recently (the previous time was 1988). The sight of this majestic wall of ice will remain with you a long time. It is part of the Patagonian Ice-cap.
Andean Patagonia is popular with trekkers, where the mountains, lakes and rivers beckon and never crowded. El Calafate is the centre of tourism of the region, whilst the smaller El Chalten is the climbing and hiking base for Mount Fitzroy and Cerro Torre.

Pampas
The grassy plains of central Argentina are known as La Pampa. Vast herds of cattle graze here. The landscape is broken to the south by the small mountains of Tandil and La Ventana and to the west by the Cordoba mountain ranges. But the Pampas is more than cows and grass, there is much wildlife that inspired W.H. Hudson: owls, hawks, rheas (an ostrich like birds), vultures, caracaras, black-necked swans, ducks, armadillos, guanacos and puma. For accommodation there are a number of comfortable ranches (estancias), such as El Ombú de Areco, where you can sample the gaucho lifestyle on horseback. This is not a place for vegetarians, their idea of supper is half a cow cooked over a wood fire.

Ushuaia
Ushuaia is the southernmost city of the world. The setting is spectacular between snow capped mountains and the Beagle channel. You can take day trips to estancia Harberton and the boat tours into the Beagle Channel where penguins and sea lions congregate. The nearby Tierra del Fuego National Park can be visited in a day or longer with camping. Ushuaia also is one of the main gateways for cruise ships to Antarctica, or cruises around Cape Horn.

Valdes Peninsula
For wildlife the Valdés Peninsula is unmissable, with its unique colonies of seals, sea lions, penguins and whales that can be seen from the shore. Whales breed between September to November. At less accessible Punta Norte, Killer whales come to feed on sea lion pups in March and April. The best place for Elephant seals is Punta Delgada. The peninsula is accessed from Puerto Madryn, the place where welsh migrants first landed to colonize this inhospitable region. In nearby Trelew one can still have tea with a Welsh family.

On a private guided tour of the sophisticated city of Buenos Aires, we shall visit the Main Square, Plaza de Mayo, with its outstanding buildings; Avenida de Mayo with its Art-Nouveau and Deco architecture, typical cafés, the Congress Building and the Colón Opera House. We will take a vintage subway for a short stretch to experience the city life and arrive at the famed Café Tortoni, an Art Nouveau landmark of Buenos Aires to sip a cup of coffee with croissants. We can organize an optional tango lesson here.

Then we will continue southbound towards La Boca, with its picturesque multicolour tin houses and lively atmosphere where we will stop at La Barrica for a glass of champagne and a street Tango demonstration. We will also pay a short visit to the world famous La Boca Stadium. After that, visit to LA BOCA NEIGHBOURHOOD overlooking the river, La Boca (“the mouth”) is a neighbourhood that feels miles away from central Buenos Aires. This area of multi-coloured, corrugated shacks and street stalls is where Italian immigrants first settled in the late 19th century. La Boca is the oldest, most colorful, and most authentic neighborhood in Buenos Aires. La Boca is partly an artist colony, and mostly a workingclass neighborhood. La Boca is a popular destination for tourists visiting Argentina, with its colourful houses and main street, the Caminito. The Genoese proudly brought their unique identity to La Boca, and one of their old traditions was to paint the outside of their homes with the leftover paint from the shipyard - as nothing else was available or could be afforded.

More about Passion for Events 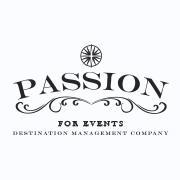 With us you will have a partner who has more than 15 years of experience, who knows Argentina from the tip of the North to way down South and who is reliable and trustwhorthy.

Today we maintain our original ideas of practical advice backed by a high standard of proposals and service for the constantly changing wishes of our clients.